abu simbel  You have not seen Egypt unless you have visited the Pyramids, you have not really visited the Pyramids unless you have been at Giza, Giza  Necropolis locates southwest of Cairo . The Giza Plateau has been used by rulers of Old Kingdoms, The oldest know Mastaba is Mastaba v which probably dates to the reign of the 1st Dynasty, the ruler  Djet( 2900 B.c)
Discover the top 10 attractions at Giza, Places  to visit abu simbel 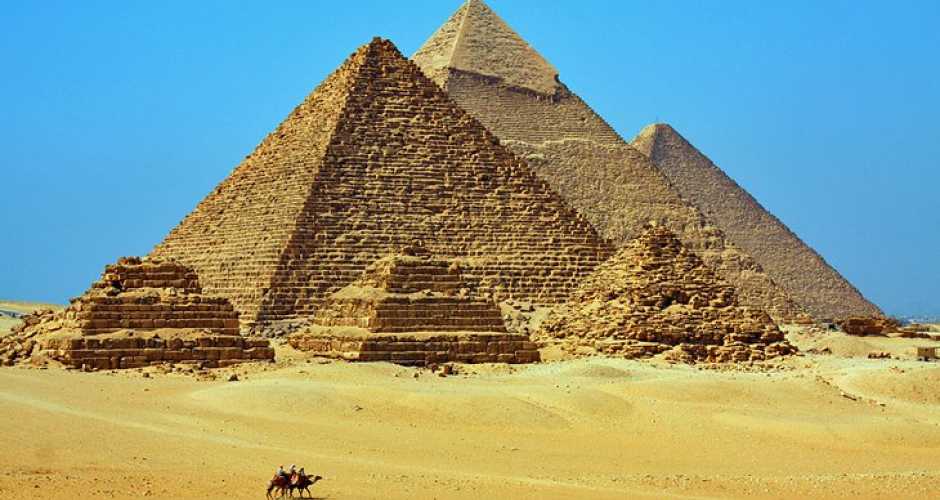 Pharaoh Khufu began the first Giza pyramid project, circa 2550 B.C. His Great Pyramid is the largest of the three in Giza and towers some 481 feet (147 meters) above the plateau. Its estimated 2.3 million stone blocks each weigh an average of 2.5 to 15 tons with a base length of more than 230 meters (750 feet) per side. The greatest difference in length among the four sides is a mere 4.4 cm (1 ¾ inch) and the base is level within 2.1 cm (less than an inch), an astonishing engineering accomplishment. 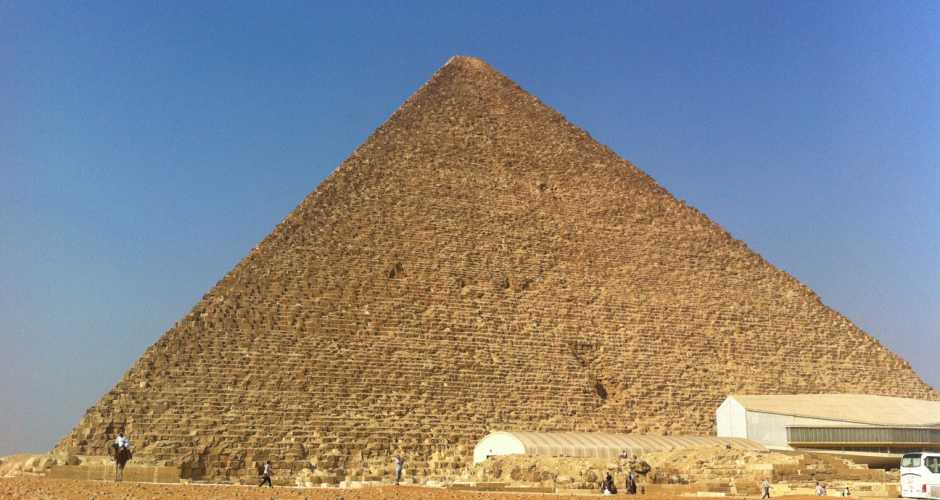 2- THE PYRAMID OF CHEPHREN (SON OF RA)

Pharaoh Khafre, also known in history by the Greek name Chephren , The third pharaoh of the 4th Dynasty during the Old Kingdom Period of Ancient Egypt around 2540 BC  was the son of Khufu who built the second pyramid at Giza. His necropolis also included the Sphinx, a mysterious limestone monument with the body of a lion and a pharaoh's head. The Sphinx may stand sentinel for the pharaoh's entire tomb complex. 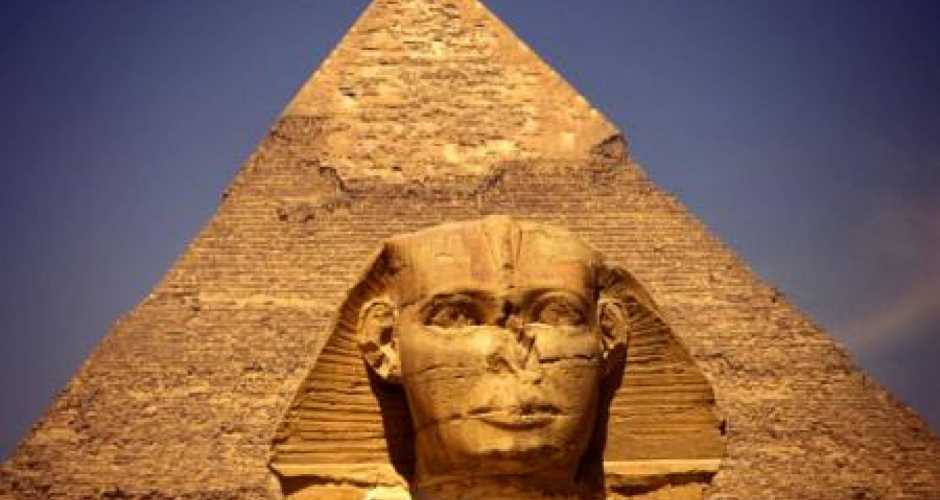 3- THE PYRAMID OF MYKERINUS (MENKAURA)

The third and smallest of the great pyramids at Giza is credited to the pharaoh Menkaure (Mycerinus in Greek). It is thought to have been completed at the end of the 26th century BC. Menkaure, like the builders of the other pyramids at Giza, ruled Egypt during the 4th Dynasty during the Old Kingdom Period of Ancient Egypt, rising to a height of 65 meters (213 feet), but the complex preserved some of the most stunning examples of sculpture to survive from all of Egyptian history. 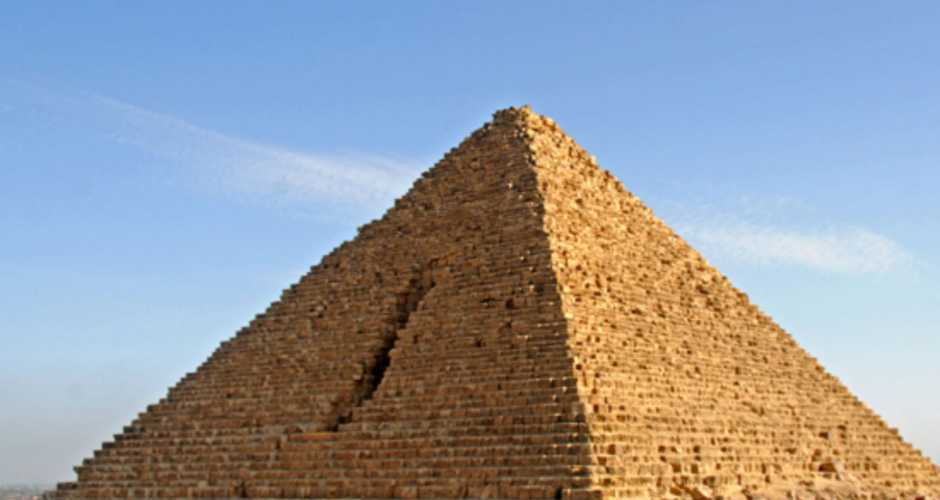 The Great Sphinx of Giza is a giant 4,500-year-old limestone statue situated near the Great Pyramid in Giza, Egypt. Measuring 240 feet (73 meters) long and 66 feet (20 meters) high, the Great Sphinx is one of the world’s largest monuments. It is also one of the most recognizable relics of the ancient Egyptians, though the origins and history of the colossal structure are still debated. 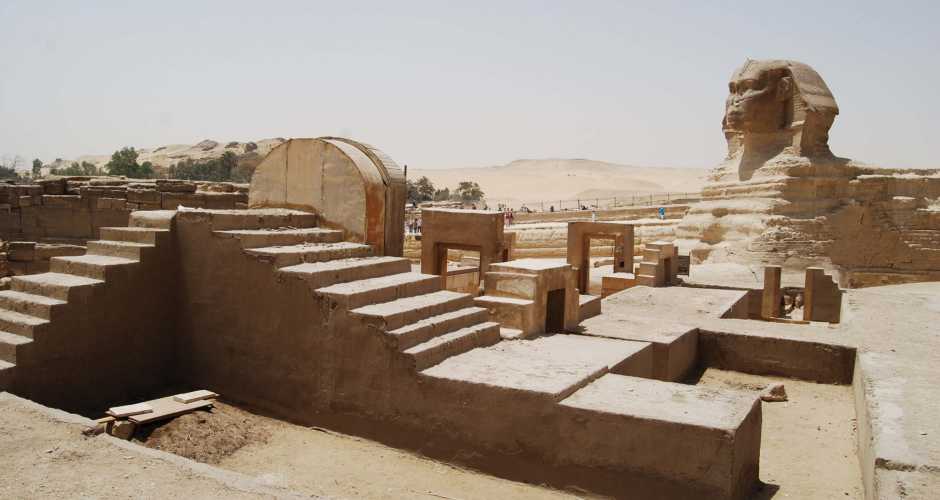 The solar boats of ancient Egyptians were large ships that were made out of cedarwood. They were used in religious rituals during Pharaonic times. Historians and archaeologists have had long debates about the exact historical name and the purpose of these boats. However, most likely these boats were manufactured to be used in the funerary rituals of the King and maybe some of his royal family members. 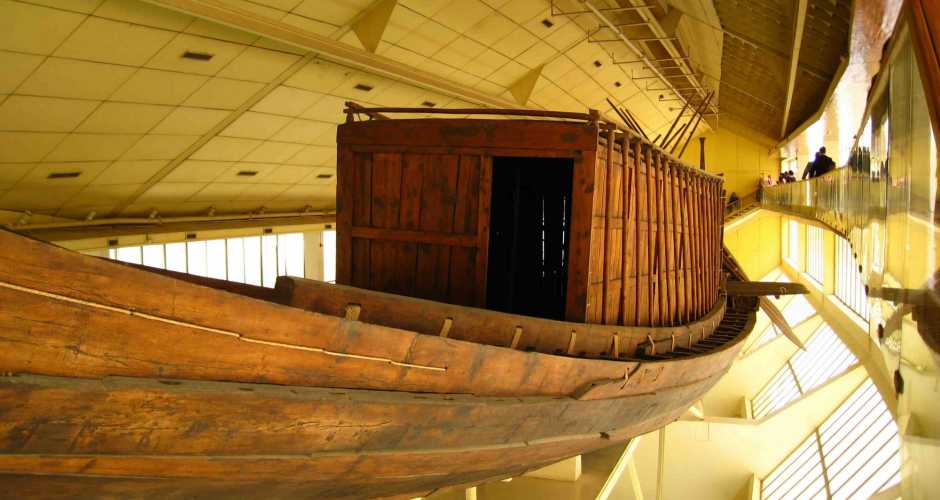 6- THE VALLEY TEMPLE OF KING CHEPHREN

The Pyramid of Khafre is also known as the Pyramid of Chephren , as Khafre was also called by this name. It is the second-highest pyramid built in ancient Egypt and is located next to the famous Pyramid of his father Khufu. The pyramid appears to be higher than the Pyramid of Khufu because of the higher bedrock it's built on. It is also the second-largest pyramid located in the Giza necropolis and is built in the same way as those of the other Pharaohs of the Fourth Dynasty. It was brought into the limelight of the modern world in the early 19th century by the famous Italian explorer Giovanni Belzoni, but unfortunately, the pyramid was found to be empty of the mummy of Khafre and many of the stone casings also seem to have been robbed away much earlier, probably during the reign of the Pharaohs of later dynasties. 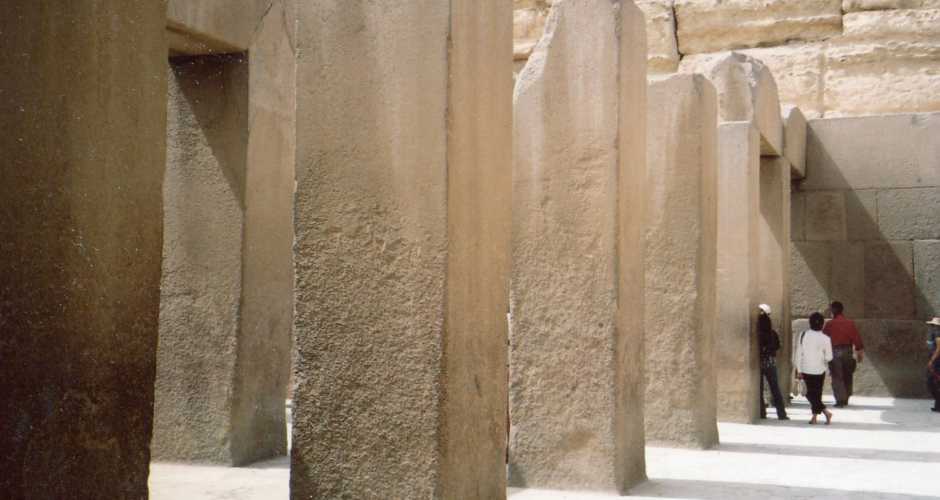 7-THE MASTABA (TOMB) OF IDU

The Mastaba of Idu (Idut) is located in the Eastern Cemetery at Giza near  Cairo , Egypt. In life, he was the Scribe of the Royal Documents in the presence of the king. The tomb of Idu, numbered G 7102 in the Eastern cemetery, lies to the east of the tomb of Qar and to the north of the much older mastaba of prince Kawab. Only a few remnants of the tomb’s masonry are preserved today above ground. He also held the title, "Tenant of the Pyramid of Pepi I" as well as "Inspector of the wab-priests of the Pyramids of Khufu and Khafre (Pyramid), during the reign of Pepi I. He lived during Egypt's 6th Dynasty. Numbered G 7102, it lies near the tomb of Qar, who is believed to have been either his father or son. It also has clear stylistic similarities to that tomb. Both mastabas are among the most interesting of the private tombs at Giza, each having unusual statues as well as very detailed scenes of the Old Kingdom funerary retinue. 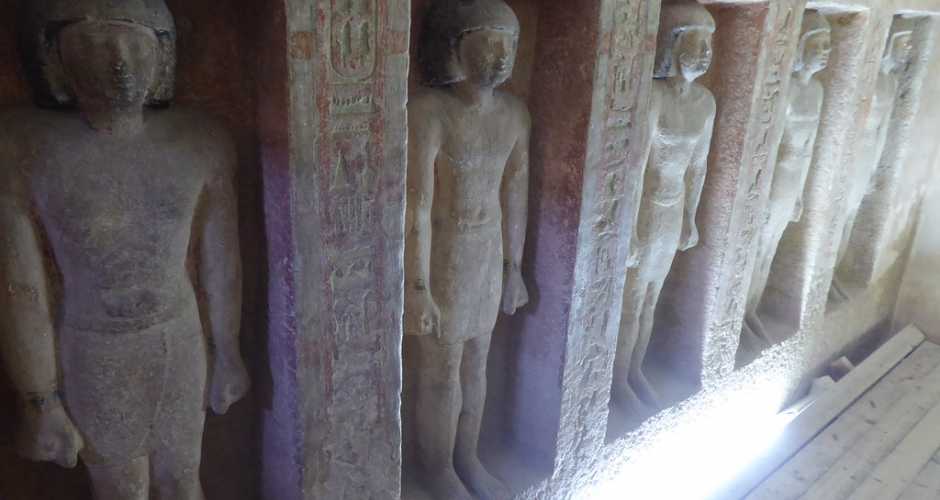 8-THE TOMB OF QAR

Meryrenefer was an official during Egypt's 5th Dynasty, probably during the reign of Pepi II. He was the "Overseer of the Pyramid Towns of Khufu and Menkaure", the "Inspector of wab-priests of the Pyramid of Khafre" and "Tenant of the Pyramid of Pepi I. However, he is better known to us as Qar (or Kar). He was married to Gefi, who was a "Prophetess of Hathor".Qar's mastaba tomb (G 7101) is located in the Eastern Cemetery at Giza. It lies to the east of the pyramid belonging to Queen Hetepheres and next to her tomb-shaft, sitting side by side with the mastaba of Idu. There may have been a relationship between these two men, but if so, the relationship is unclear. 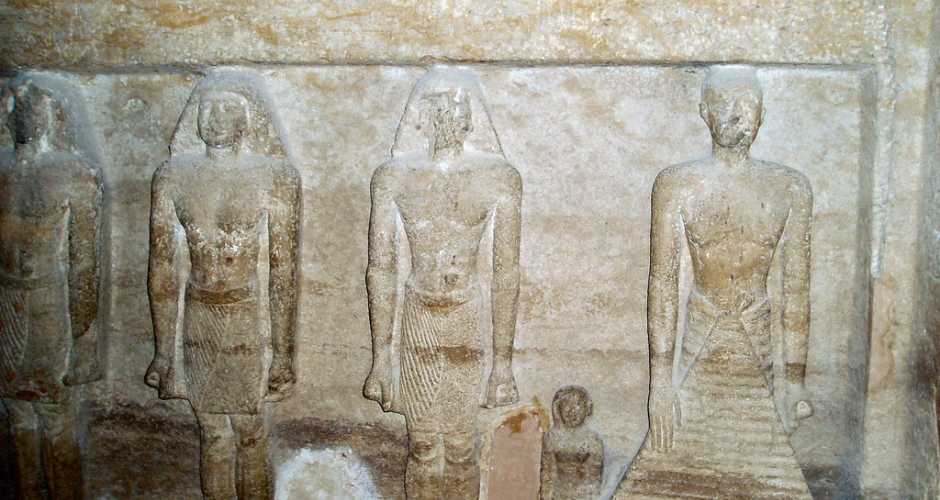 9- THE PYRAMID OF QUEEN HETEPHERES I

Queen Hetepheres I lived during the fourth dynasty (Old Kingdom) of Ancient Egypt. She is thought to have been the daughter of Huni and Djefatnebti, the principal wife of Sneferu and the mother of Khufu. An inscription on a chair recovered from her tomb describes her as “Mother of the King of Upper and Lower Egypt, Follower of Horus, Guide of the Ruler, Favourite one, She whose every word is done for her, the daughter of the god’s body, Hetepheres”. Hetepheres I may also have been her husband’s sister, and if so their marriage would have been politically expedient to consolidate his rule. She was probably the mother of Princess Hetepheres A, the wife of Ankhaf (the son of Sneferu and a minor wife). She may also be the mother of another unnamed daughter who married Khufu and was buried in the tomb the Queens Pyramid G1c in the Great Pyramid Complex of Khufu at Giza, but some experts believe this tomb was built for Queen Meritites (another of Khufu’s wives) or for Hetepheres I herself. 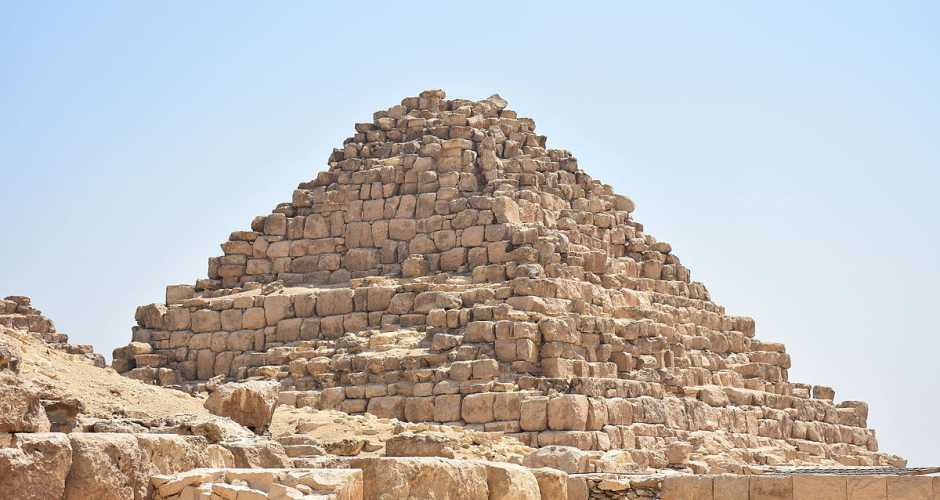 Queen Meresankh III was the daughter of Hetepheres II - the Queen of the IV Dynasty (2723 to 2563 BC) and Prince Kawab, the granddaughter of Khufu - the King of the IV Dynasty of the Old Kingdom and the wife of Khafre - the 4th King of the Fourth Dynasty. Meresankh died shortly after the end of the reign of Khafre and was buried in the Mastaba, built in the Necropolis of Giza (G7530). The inscriptions on both sides of the entrance to her tomb tell us that the burial of the Queen was made 272 days after her death: 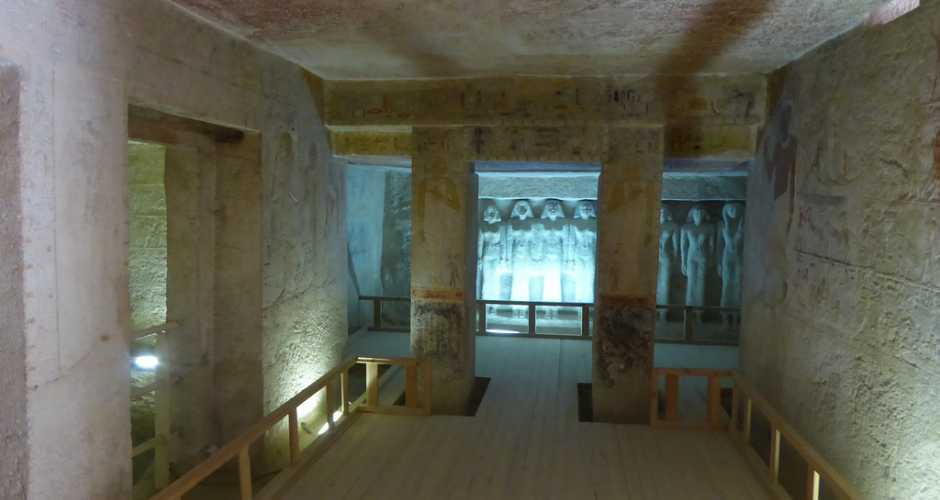